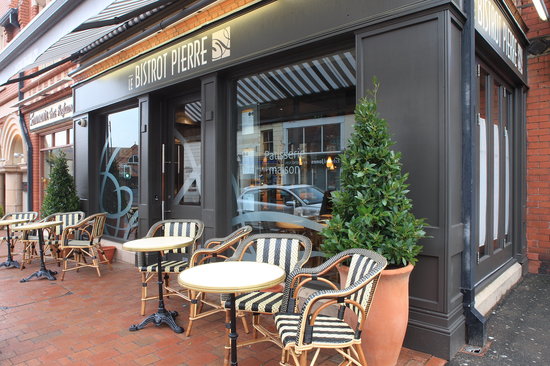 This photo of Le Bistrot Pierre is courtesy of TripAdvisor

This is one of my parent’s favourite places to eat. It is a place they regularly go to at lunch time in the week, as they have some great offers. I have visited a few times with them and it’s always been pretty good. This time is different though, as I get to do a write up about it!Whenever I have been before it has filled up quite quickly. We arrived at bang on half past 12 and were one of the first to sit down for lunch. We were greeted by someone at the front desk and got seated at the front window (the perfect seat to people watch).

The waiter handed us some menus and wandered off. I was dying for a drink and was surprised that we didn’t get the drinks order taken there and then. The waiter returned about 5 minutes later, though, and we ordered some drinks.

Here is a link to the menu for the lunch time special. You really can’t complain abiut the price! 2 courses costs £10.95 and 3 courses just £12.95! There are a few dishes such as steak that require an extra few pounds if you pick those but I think thats quite reasonable.

There was a bit of a wait for the starters to arrive and I kept eagerly looking over at the kitchen to see if the food coming out would be ours. When ours came out here is what we had:

The squid below is what I ordered. I have to admit that I think my starter was the worst out of the 4 on the table. I know its a starter but it was tiny and I munched the squid in about 1 minute as they were only small, even though they look big on the picture. I know starters are meant to be small, though.

Emma got the French onion soup. No complaints here.

Both of my parents went for Ramequin aux champignons! My mum loves this dish and has tried to replicate is at home. I don’t think she has managed to make it quite as nice as here though 🙂 I have ordered this starter in the past as well and it is really nice.

After another wait the waitress took away the empty plates and then the main courses arrived. Again, I felt this was quite a long wait. Maybe I am just impatient though. Luckily I was in good company!

For the main course I decided not to get the burger that I have had there before. I went for the duck! This came at a supplement of £2.95 extra. I have no complaints, though. It tasted amazing and I ate every last bit.

Emma went for the slow braised beef. I managed to pinch a bit and it is something I would order if I went again.

My mum went for the Warm Tartlet picture below. I managed to grab a piece of this as well. It wouldn’t be my first choice, but it was nice and my mum enjoyed it.

My dad went for the rump steak. This was an extra cost of £3.95. I also grabbed a bit of this at the end as he didn’t manage to finish it all. I preferred my duck over the steak.

It then seemed to take a while for anyone to take our dishes. Maybe its because of where we were sitting or as I said before, maybe I am just impatient!

Lets get on to the desserts.

With it being just an extra £2 each for dessert, and with us having a tiny bit of room left in our stomaches it would have been rude not to have ordered one.

I was going to go for the Creme Brulee as thats a favourite of mine but decided to mix it up and went for the chocolate torte at the last minute. I have to admit, I wish I had gone for the Creme Brulee. I would have liked a bigger bit of ice cream to go with it.

Emma went for the bread and butter pudding. She said this was nice and the bowl was left empty at the end.

My mum ordered the Creme Brulee. This was a decent size! Why didn’t I order this!?

I didn’t manged to get a picture of my dads dessert. By the time I went to take a picture he had already eaten half of it.

Overall, I really enjoy going to Le Bistrot Pierre as the menu is excellent value but on this occasion the service was just a bit slow. The staff however are all very polite it just seemed to take them a while to get to our table sometimes. This could have just been where we were sitting, as it’s not a table they would pass that often.

Have you been to Le Bistrot Pierre before? What was your experience like? Please let me know in the comments below!

My name is Mike and I literally do eat everything (apart from cold tomatoes, yuck) On this site you can find my restaurant reviews and other food related posts.

I hope my site will help you choose where the good places are to eat and which ones to avoid.

Do you have a place that you want me to review? You can find me on twitter @payt or get in touch through the contact form.